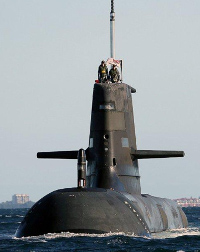 In 1988-90, Dwight Walker, our director, worked as a computer systems officer software engineer programming Ada on UNIX systems using CASE tools for real-time combat systems in the Australian Dept of Defence at HMAS WATSON and CSC Sydney on the New Submarine Project (Collins Class Submarines) and on Oberon Class submarines at HMAS WATSON including the simulator. This software development facility and Collins Class submarine base were moved to HMAS STIRLING at Fleet Base West in Perth, WA after Dwight left HMAS WATSON.

Fleet Base East is based at

Oberon Class submarines were based at HMAS PLATYPUS (HMAS PLATYPUS history) which was decommissioned on 14 May 1999.

Sister base was HMAS ALBATROSS at Nowra NSW, the RAN Fleet Air Arm with Seasprite helicopters.

Australian Marine Complex is at Henderson WA where patrol boats will be built for RAN in Naval Shipyards.

As a civilian in our own private company, we will explore Defence software engineering projects in Canberra or elsewhere in Australia, NZ, UK or Canada.

In December 2018, I went to Defence Future Submarine Project briefing in Adelaide SA.

I went to Future Submarine Industry Briefing by NAVAL Group, Lockheed Martin, Defence CASG and Defence CDIC on 11/5/17 in Brisbane where I expressed interest to Lockheed Martin in developing combat system software.

In October 2017, due to hardware being tendered first, Lockheed Martin delayed tendering for software for which we have high skills in real-time systems from our experience in Defence.

In December 2017, I successfully completed Cyber Warfare and Terrorism MOOC at CSU IT Masters and got high distinction, preparing me for work as a signals intelligence operator in Defence with software engineering background.

In 2018, I successfully completed Enterprise Cyber Security Fundamentals, Phishing Countermeasures and Computer Network Fundamentals at CSU IT Masters MOOCs and got high distinctions. These enable me for enterprise cyber security.

As independent IT contractor, we build systems that are on time and on budget using Agile methodology and our own project management system built using our computer science and information science background. This is from our experience at handling project overruns and cost blowouts in Defence and our own business since 2005.

In November 2017, I successfully completed training in PRINCE2 Primer, a popular project management methodology, via a MOOC at CSU IT Masters, enabling me to tackle project managemetn of large projects in government departments or large corporations.

In 2000 when I lived in Merrylands NSW, we visited Defence National Storage and Distribution Centre's Joint Logistic Command in Moorebank with Parramatta BASI. In 2015 with my MIT certificates in supply chain management, I am ready to tackle this area of Defence procurement systems. In Oct 2012, this huge logistics centre was being moved and modernised by Defence.

In September 2015-May 2016, when we studied 2 supply chain management edx.org courses at MIT, we received very high marks as we are excellent at mathematics via our Bachelor of Science degree.

In October 2017, we got a forklift HRW licence.

Defence has not forced subcontractors to reset default passwords.

In October 2017, ASD found there was a hack where 30GB of ship, plane and bomb plans were downloaded from a Lockheed Martin (?) subcontractor's Website using the default passwords which were not reset. This shows lack of SWMS (Safe Working Methods Statement) and Hazard Controls I learned doing forklift licence. I always reset default passwords so am more competent than the company who got that subcontract.

Defence is a poorly run industry. It needs basic IT and information management skills but skimps or is too big to monitor itself.

Australian National Audit Office (ANAO) analyzed Defence and found out IT contractors were doing undocumented changes from 2014-15 to 2017-18 and not been remedied.

Defence is very bureaucratic. Project management and metadata need to be used to find information re projects.

Defence Ipswich had a conference in 20 November 2018 to aid manufacturers to obtain Defence contracts. Ipswich is right next door to RAAF Base Amberley.

In August 2020, Hunter Defence is gathering interested companies. I found out via I2N (Integrated Innovation Network) at University of Newcastle.